A Period of Protest

The counter-culture movement in the '60s and '70s was paired with a dramatic increase in protest action, which fuelled anti-Vietnam War protests. There was protest against discrimination in the Springbok Tour of 1960. New Zealand had decided to send white-skinned people only to tour in South Africa, but opposition to this flourished, with the slogan, “No Maoris, No Tour.” There were environmental protests, such as the ‘Save Manapouri’ Campaign in 1959. The anti-nuclear movement was a centre of protest, with New Zealanders advocating for a nuclear free country in response to French nuclear testing in the Pacific. Protests were occurring nationwide, and a trend of dissent encouraged protest against New Zealand’s involvement in the Vietnam War to emerge.

The blossoming counter-culture movement in New Zealand was a huge factor in how protest movement against Vietnam came about. In the 1960s and 1970s, New Zealand was following an international trend of idealism and optimism, where people began to question New Zealand’s conservative, and in some respects, repressive society. Ideas were changing, largely from being exposed to new ideas from overseas. British bands such as The Beatles, The Rolling Stones and The Who were being heard by young kiwi listeners. The revolutionary messages carried in these songs had a great influence on counter-culture internationally. In 1964 The Beatles toured New Zealand, instigating mass hysteria.
Imagine by John Lennon, ranked number one on the 10 Top 'Anti-War/Protest Songs About the Vietnam War' on the Examiner website. (http://www.examiner.com/article/10-top-anti-war-protest-songs-about-the-vietnam-war)
Many of the youth in New Zealand adopted the styles of British ‘mods’ and ‘rockers.’ In New Zealand, we had the emergence of a style
known as ‘bodgies’ and ‘widgies.’ These youngsters were labelled much more rebellious and promiscuous than their parents’ generations, and continued to challenge society’s conservatism.

Most of the people in the older generations were wary of this liberalism. A ‘return to Christianity and traditional values’ was called for, as these racialists seemed to have been the cause of higher crime rates among youth and a general deterioration of morality. 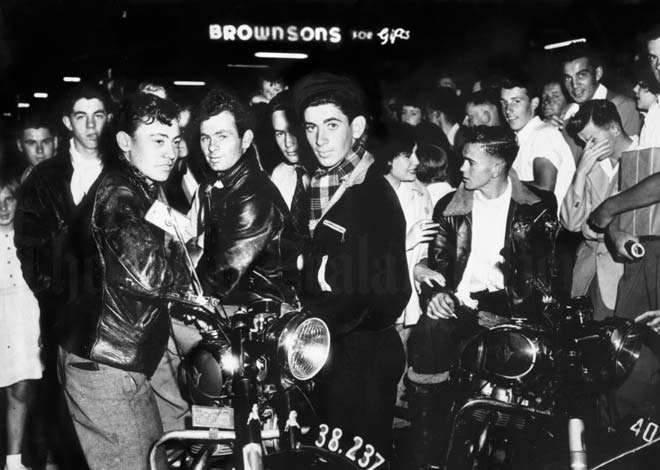 Bodgies on Auckland's Queen Street in the 1950s. (Sourced: Ben Schrader. 'City children and youth - Bad behaviour', Te Ara - the Encyclopedia of New Zealand, updated 10-Jul-13 URL: http://www.TeAra.govt.nz/en/photograph/21965/milk-bar-cowboys)
New Zealand was caught up in the baby boom generation following the end of the war, and the population peaked in 1961 with 65,476 babies being born. At the beginning of the 1960s New Zealand retained one of the highest standards of living in the world, although in 1967 the rapid drop of wool prices meant that the economy was later altered. This meant that people had the time to explore different issues such as New Zaland's involvement in the Vietnam War. In general, the public became much more interested in politics, and therefore protests were more likely to take form.
Television was introduced nationwide in New Zealand in 1961, and by 1968 there were more than half a million registered T.V. users. Kiwis avidly watched the Wahine disaster and Neil Armstrong landing on the moon. We were being exposed to all sorts of new things. The footage from the Vietnam War on T.V. made the war become known as the ‘television war’. It was one of the first wars to ever be televised. Stronger opposition, including in New Zealand, grew from watching the horrors that were occurring there.

Anti-War Protest in the USA

During the ‘50s and ‘60s in the US, traditionally socialist groups and previously pacifist groups were the first to protest. This group of people were known as the Old Left. One of these pacifist groups was the Fellowship of Reconciliation (FOR), which was first established in 1914 to oppose WWI. This was a highly significant group in the US and Britain. Another pacifist group which was very important in America was the War Registers League (WRL). This was a secular organisation founded in 1923 to express anti-war sentiments in regards to the Korean War. Members of the WRL protested by burning draft cards, and in December 1964, they organised the first nationwide demonstration against the Vietnam War. There was also religious opposition to the war in America, characterised by groups such as the Clergy and Laity Concerned about Vietnam (CALCAV) in 1965.

Following Johnson’s escalation of the war in 1965, the protest movement intensified. A counter-culture movement was participating in protest, exemplified by protests organised by students. The University of Michigan organised a “teach-in” on the 24th March 1965 in Ann Arbor, to educate the students about the goings-on in Vietnam and convince them to take a pacifist stance in the conflict. More than 3,500 people attended this teach-in. There were many more similar “teach-ins” across the country during that year. The group Students for a Democratic Society (SDS) were very effective in their protest. They were formed in 1960, and by 1966 members had reached numbers of 30,000. Their approach to opposing the war was highly liberal, and they were renowned for their activism. Across the country, students occupied administration buildings on university campuses to allow their opinions to be heard. The group dissolved in the 1970s, following their breakdown into non-united factions.

Another group of people who protested in the United States were those concerned with civil rights. An alliance between the anti-Vietnam War protests and the Civil Rights Movement was called for. This developed from concerns about the effects of war on LBJ’s Great Society programs.

As time went on, not only the radical left were involved in protest. The more conservative right in America also viewed the war in Vietnam as wrong, with the attitude to wither ‘win or get out.’ 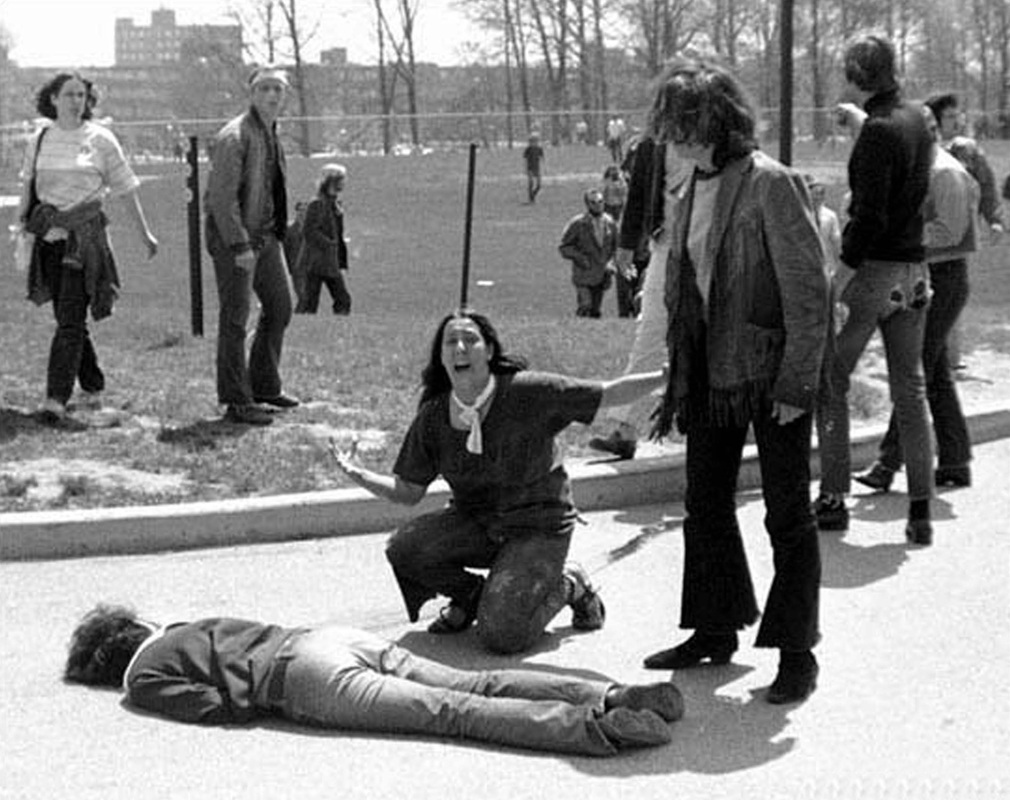 Photo taken on May 4th 1970 by student photographer John Filo. Students protesting at Kent State University, as a response to America bombing Cambodia, were shot at by guardsmen. 4 were killed, and 8 wounded. President Nixon released a questionable statement, saying, “This should remind us all once again that when dissent turns to violence it invites tragedy.” (Sourced: ‘Iconic Photos of the Vietnam War and Their Influence on Collective Memory’, by Angie Lovelace, http://vietnamiconicphotos.wordpress.com/tag/kent-state/, accessed 20th August 2013, posted August 26th, 2010)