Protest action which was undertaken in New Zealand took a variety of forms, often very radical in nature, and led mostly by youth.

One key individual who led protests against New Zealand's involvement in Vietnam was Tim Shadbolt, the young student with a "larger than life personality." (Te Ara Encyclopedia of New Zealand, http://www.teara.govt.nz/en/photograph/20157/tim-shadbolt).
The Progressive Youth Movement was a nationwide protest group formed to oppose New Zealand troops in Vietnam. They were a very successful group in attracting both public and government attention in the highly radical way in which they protested.
Many of the marginalised groups of New Zealand society took part in the protest. These included Maori and Pacifica people, and women. This is very important in that even groups which were on the edge of society were getting their say in the protests, making the anti-Vietnam War movement highly significant for New Zealand. 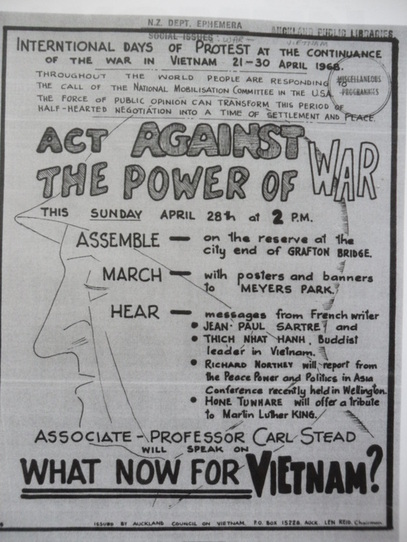