Tim Shadbolt was a key figure in the anti-Vietnam War movement who spurred youth into an active protest approach. Born in 1947, Shadbolt was a student anti-war activist during the 1960s and 1970s and a leader of AUSAPOCPAH (the Auckland University Society
for the Active Prevention of Cruelty to Politically Apathetic Humans) founded in 1968. While this was a very small group, never counting for more than 8 members, Shadbolt was a leader of the anti-war movement itself. He was described by the AUSA (Auckland University Students’ Association) as “a particularly charismatic speaker and personification of this new student spirit of free expression, energy and rebellion.”

Shadbolt was arrested 33 times for his active approach in the anti-war movement, most famously for using the word “bullshit.” (Later on
this would be incorporated into the title of his autobiography, Bullshit and Jellybeans.) Weekly meetings in Albert Park known as the “Jumping Sundays” were organised by Shadbolt. From 1969, these meetings raised awareness of the issues of New Zealand’s involvement in the war, and encouraged protest. Many protest action was undertaken. (See quote below.) 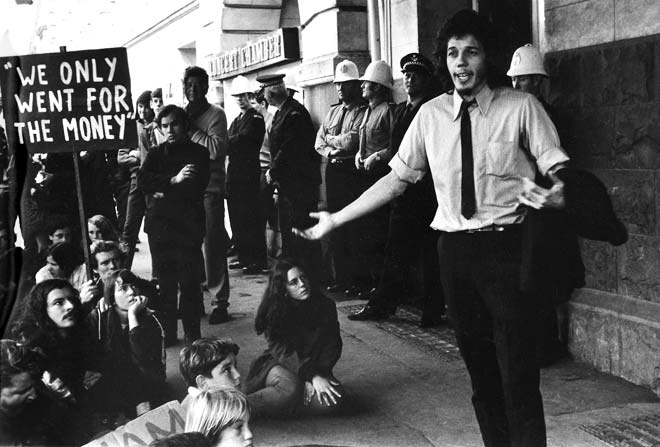 Shadbolt with a group of protesters outside the Auckland Town Hall in 1973. (Sourced: Max Oettli, Te Ara - the Encyclopedia of New Zealand, updated 8-Jul-13, retrieved from http://www.teara.govt.nz/en/photograph/39842/a-demonstration-1973)

The emphasis was on small but persistent
action: guerrilla protests, pickets, leaflets, posters, parades… We used to have
marches down Queen Street. Our biggest rallies drew as many as 35 people. We
also picketed American warships… An Auckland housewife was arrested for singing
anti-war songs on an American ship and was charged with offensive behaviour. We
were small, we were social outcasts, but we kept going. Gradually things began
to change.”