The families of veterans suffered from being targeted by protests. Many of the men’s’ wives hid the information of their husbands’ whereabouts, and their children were bullied at school, called by others the ‘army brats.’ The families received little information from the army about what the veterans, which must have put them under considerable emotional strain. This time, they were also able to watch the Vietnam War on the television, which, when seeing all of the atrocities which were occurring there, presumably heightened their fears. There is little record of the emotions which the families of the veterans were subjected to, but it is not difficult to see that it would have been hard for them.

Some wives were subject to prank calls warning of their husband’s death in Vietnam. Phone calls to Wairou army base were screened after such an incident. For the families of 37 men, the soldiers’ deaths became a reality. These families must have suffered enormously from such an experience.

Veterans on their Return

In 1972, after the remaining New Zealand troops were withdrawn from Vietnam, the men themselves were subject to even worse resentment. The soldiers returned to a war which had become largely unpopular. They were shocked to find themselves labelled by many as ‘warmongers’ or ‘baby-killers.’ Veteran Mark Tiro later recalled, ‘I thought we should have been treated as heroes.” For the homecoming of the soldiers, several anti-war activists lay across the road and covered themselves in fake blood. This was the kind of bitter welcoming the veterans received.

The physical damage from exposure to Agent Orange toxic defoliant spray and psychological damage in the form of post-traumatic stress disorders was disregarded by most of the public. Colin Sisson even went as far as saying that the protests in themselves were “probably the biggest reason for the mental damage that Vietnam veterans experienced as a direct result of the war.” A Health Select Committee made an enquiry into the effects of Agent Orange on the veterans only in 2003, and this concluded that the men were indeed subject to adverse health effects, and their children were affected likewise. It is noteworthy that more than 600 New Zealand soldiers died of cancer related to Agent Orange.

On return, the veterans also went unrecognised by the New Zealand Government for their efforts in the war. In fact, it wasn’t until 2008 that the Government gave the soldiers official recognition. The Vietnam War Tribute 08 included a ceremony honouring those killed in action and a memorial service. Helen Clark made a formal apology around that time to the 3,400 New Zealanders who served in the Vietnam War due to this lack of recognition.

Who will stop the pain?

I am an old soldier. I fought in Vietnam
We patrolled the jungles seeking those who do harm
Yes we hit the enemy but we didn’t always win
Some were wounded some were killed
And I still feel the pain

While we were patrolling, planes flew all around
Clouds of mist and vapour came falling to the ground
What it was we didn’t know and they didn’t say?
Now we get rashes we get cancer
And I still feel the pain

They call it Agent Orange a poison to kill the trees
I have it now inside of me my children got it free
Their blood it don’t mix too well some bones are just not there
Now they wonder and they suffer
Who will stop their pain?

I know my days are numbered but not sure when it will be
Many have gone before me while others are still free
My mind it now wanders its ugly head it reigns
I still wonder yes I wonder
Who will stop the pain?

The anti-Vietnam War movement set a basis for the exploration of alternative lifestyles by the radicals in society. The anti-war activism had encouraged the hippies in becoming increasingly radical in going against the norms of society. Many of these people went on to join communes after the Vietnam War was over, such as the commune Tim Shadbolt and his wife Miriam Cameron established in Huia in west Auckland in the early 1970s. Other communities, usually with the objective of self-sufficiency, were established in land areas that were more isolated and cheap. Examples of these are Karuna Falls founded in 1976 in the Coromandel, and the Tui community in Golden Bay in 1984, both of which were still in existence in 2010.

One of the most famous communes established during this time was James K. Baxter’s commune in Jerusalem, by the Wanganui River. Established in 1968, Baxter describes its aims to establish “a community where the people, both Maori and Pakeha, would try to live without money or books, worship God and work on the land.” However, media attention attracted an increasing number of people, and the community was disbanded by the Wangangui community due to concerns of overcrowding. A smaller group did return in 1972, and after Baxter’s death later that year, the commune survived until 1975.

The Ohu Scheme introduced by Prime Minister Norman Kirk in October 1973 allowed the government to lease land to kibbutz-like commune communities. Ohu meant 'to live together' in Maori, which was a very apt title for the policy. In August 1974 the Sunburst community were the first ohu to be approved by the government and were given 80 hectares of land near Whitianga. Despite difficulties, the scheme allowed a total of 8 ohu to be established. After Kirk’s death the scheme became unpopular. There were only three ohus by 1983 and the last ohu dissolved in 2000. The communes started following the hippie emergence in the anti-Vietnam War movement formed the basis for ecovillages in New Zealand today, such as the Awaawaroa Bay Ecovillage on Waiheke Island (as taken from the year 2010). 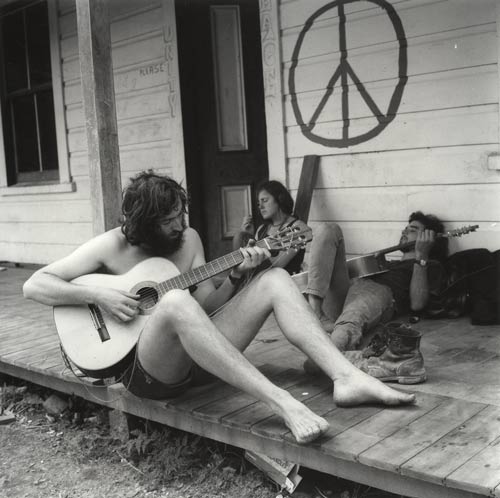