The Progressive Youth Movement was an important anti-war group who radicalised youth protest in New Zealand. It was one of the most active and militant groups to emerge in the counter-culture movement. The PYM, founded in 1964 by three young teachers, advocated for the radicalisation of protest in order to be effective.

By 1970 branches of this organisation had infiltrated nationwide. Their main branches were based in Auckland, Wellington and Christchurch, but smaller branches had been established in smaller cities including Hamilton, Palmerston North, Rotorua and Napier. While the branches were not completely united, they all were highly liberal in their views, believing that most current demonstrations against the war were “weak and gutless.” With their provocative protest methods the group attracted considerable attention, and upset both the National and Labour Parties. Protest methods which were adopted by the group were demonstrations, the distribution of leaflets and magazines, and the holding of film evenings, vigils and demonstrations. Some even organised hunger strikes. During the 150 demonstrations by the end of 1972, some chants which will be remembered included, “One, two, three, four, we don’t want your bloody war!” and “Hell no, we won’t go!”

Not all protest during this period was as radical as that of the PYM, such as the actions of the AUSAPOCPAH led by Tim Shadbolt. However, the liberality of the Progressive Youth Movement was very effective in attracting government attention and ultmately for the withdrawl of New Zealand troops. They will be remembered for many years to come. 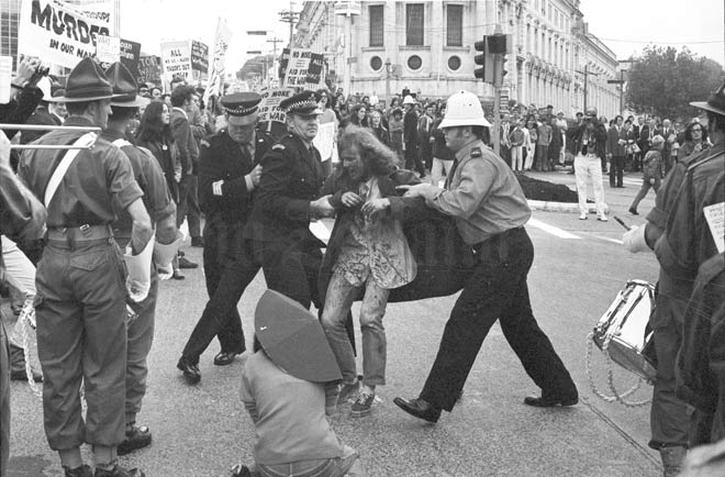 The return of Battery 161 to Auckland in 1971 was met by protesters who covered themselves in fake blood and accused the soldiers as murderers. (Sourced: New Zealand Herald, Ref 100505NZHBATTERY.JPG, Te Ara - the Encyclopedia of New Zealand, retrieved from http://www.teara.govt.nz/en/photograph/32704/vietnam-hostile-return-home)